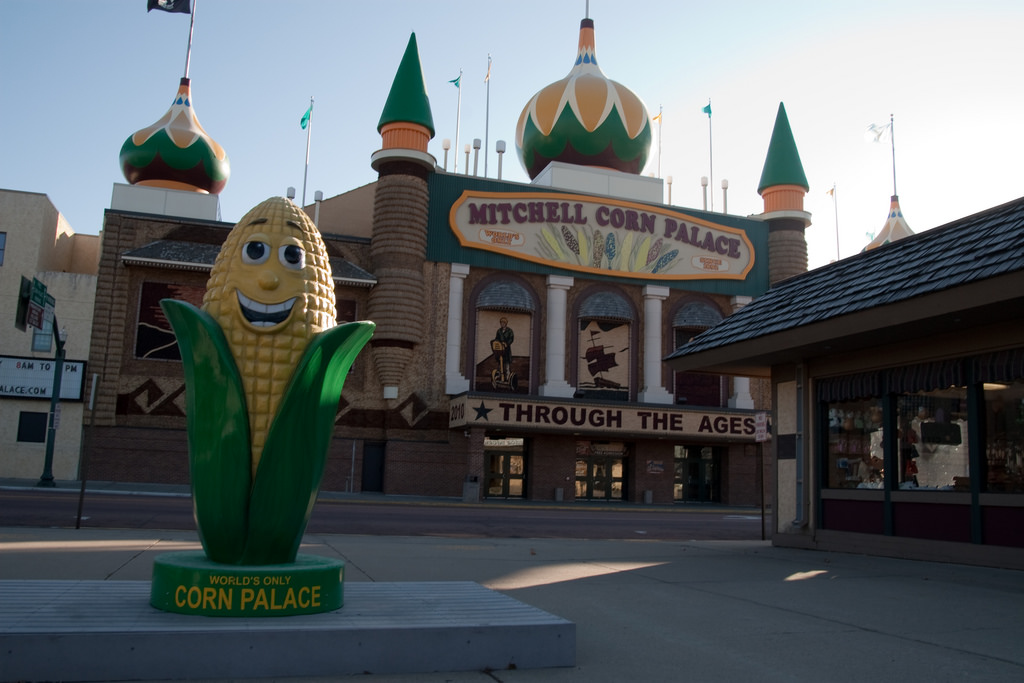 Dacotah is a Native American word for “friend.”

After achieving our legal requirements for South Dakota residency, voter registration, re-establishing Medicare coverage and plethora of sight-seeing tours around the Black Hills, we headed out into the vastness of the rolling prairies that lay from Rapid City in western South Dakota to the eastern city of Sioux City.

The Coach now travels along easier without the long grinding steep inclines so common in Colorado, Wyoming and the Black Hills of South Dakota.  We make good time as we follow Inter-State 90 towards the Lake Cochrane Recreational area run by the South Dakota Parks Department.  This allowed us to make several stops along the way for points of interest.

We stopped in Wall Drug. I have seen their bumper stickers on cars as long as I can remember! Well, it is the biggest commercial entity I have seen outside of Yellowstone. There were stall and more stalls, selling everything from sports pennants, rubber tomahawks, and high priced Western prints to a hundred different formulations of fudge flavors.  We partook of the fudge settling on a combination of peanut butter and dark chocolate! YUM!

The next stop along the I-90 Corridor was the Corn Palace.  It is called the Madison Square Garden of the Mid-West.  It is an arena that features concerts, theatre plays, comedians, magic acts and most importantly, basketball games for the local high schools.  Its Taj Mahal type towers, all its outer and inner mural panels are totally constructed of different colored corn cobs cut and shaped into scenes.  These scenes change in variety and complexity twice a year.  I marveled at the mural’s depth and scope. This is different and neat, but I wondered how one becomes a corn cob mural artist.

Closer to Sioux City, the high plains prairies with their open range pastures turned without protest into fields of endless corn and soy bean fields. Each field is the same as the last in a seemingly endless progression of bright green leaves waving in the southern breezes. They remind me of a sea with rolling waves that shimmer and shine with the changing light.  It is a pleasant visual experience.

Here along the inter-state medians and shoulder areas are mowed.  I quickly realized that the adjacent landowners are mowing them and collecting the cuttings into four-foot high round bales. What seems to be present is cooperation between the state and the landowners.  When I asked about the practice at a local station they told me it is necessary to help protect the highway travelers from deer crossings, that without those cuttings, deer would just suddenly appear, and you can guess the rest.  It must work as there are absolutely no dead dear carcasses along any of the highways and it gives highway systems a total look of being manicured, almost estate-like!

We find Lake Cochrane Recreational Area to be the most rural place we have stayed so far!  Jude reports to me that there will be no Interstate noise here.  I laugh as we have had our brushes with Colorado RV Parks that are close to the constant rumble of interstate travelers.

The Recreational area features two lakes. Cochrane is a large body of water with its twin lake called Oliver right next door.  This presence of two bodies of water makes it very convenient for me to fish and the warm temperatures and humidity made it possible to fish at night.

I forgot how pleasant it is to fish at that time.  The rural nature allowed a really nice view of the Milky Way and all the stars present on a New Moon.  The shore line has limited access places and was almost entirely wooded with mature Oaks and Cottonwoods.  Among the trees and bushes is an old friend that I have not seen since my Army enlistment days at Fort Leonard Wood, Missouri…Fire Flies!

There is a sentiment of peace with the gentle winds, the star-lit skies punctuated with the occasional shooting star, the sounds of the nocturnal animals and then the on and off bursts of light from the fire flies.  Nice, really nice, and oh, did I mention the fishing? Blazing!!!

The bass were eager to cooperate and throughout the evening, I caught nearly thirty bass. This was just the icing on the cake of a wonderful summer evening. Within my stay around the Cochrane and Lake Oliver area, I had a very successful fishing adventure with numerous catches of Large Mouth Bass, Walleye and Northern Pike.  One Walleye measured over 20” and one Northern measured in at 33 inches.  Wow!! I am grateful for my nomad travels. What fisherman could not like this!

One thing I have always said about quality involved fisherman is that they are the first witness to water and environmental issues.  They notice things going on negatively and are involved with trying to create better fishing and that includes the environment where fish live. I was going to be a witness. It was during an afternoon fishing on Lake Oliver, I noticed an animal in the shoreline bushes.

It looked like a beaver and I wondered how a beaver lived here as I never noticed the presence of a domed stick beaver house anywhere in the two lakes.  I sit motionless in my float tube and studied the large brown animal.  I guessed it to be nearly 10-15 pounds and watched it stripping the bark and leaves from a bush.  I waited until it turned to see if I could see the flat tail and positively identify it as a beaver. It eventually turns.  No flat tail!  This animal has the tail of a rat!

So here was an animal that looked like a beaver but was not. It was way too large to be a Muskrat.  That could only mean one thing.  I believed I was watching a Nutria. They are an invasive species from South America.  They are a large rodent and do considerable damage to waterway shorelines and dams by digging their denning burrows.  Where they are common in such states as Florida, Georgia, and Louisiana, and other southern states, their Game & Fish Departments have full time employees who do nothing else but attempt to eradicate the Nutria.

Their ability for frequent litters and few animals that can help control them; they are a serious problem where they are found.  But this is South Dakota, a very harsh climate in the winter with snow and ice.  How could this animal be so far north?

I quickly go to the internet to make sure…Wow!! There is no doubt.  The Nutria in the images section are a dead ringer for what I saw on the shoreline.

I seek out the Park staff and report my sighting.  They quickly report the incident to the South Dakota Department of Fish & Game.  The very next morning, a game warden comes and interviews me concerning my discovery along the shoreline of Oliver Lake. I report to him the where and when, size and everything else I can remember!

He says that they are taking the report very seriously and are mobilizing a team within the Department to arrive and find the reported critter as they are fully aware of the destructive nature of the Nutria on aquatic environments.  I am happy that I was able to report such a threat to the authorities, but I would have no closure on this as we were leaving the recreation area and traveling north and east to the Detroit Lake Area in Minnesota the next day.