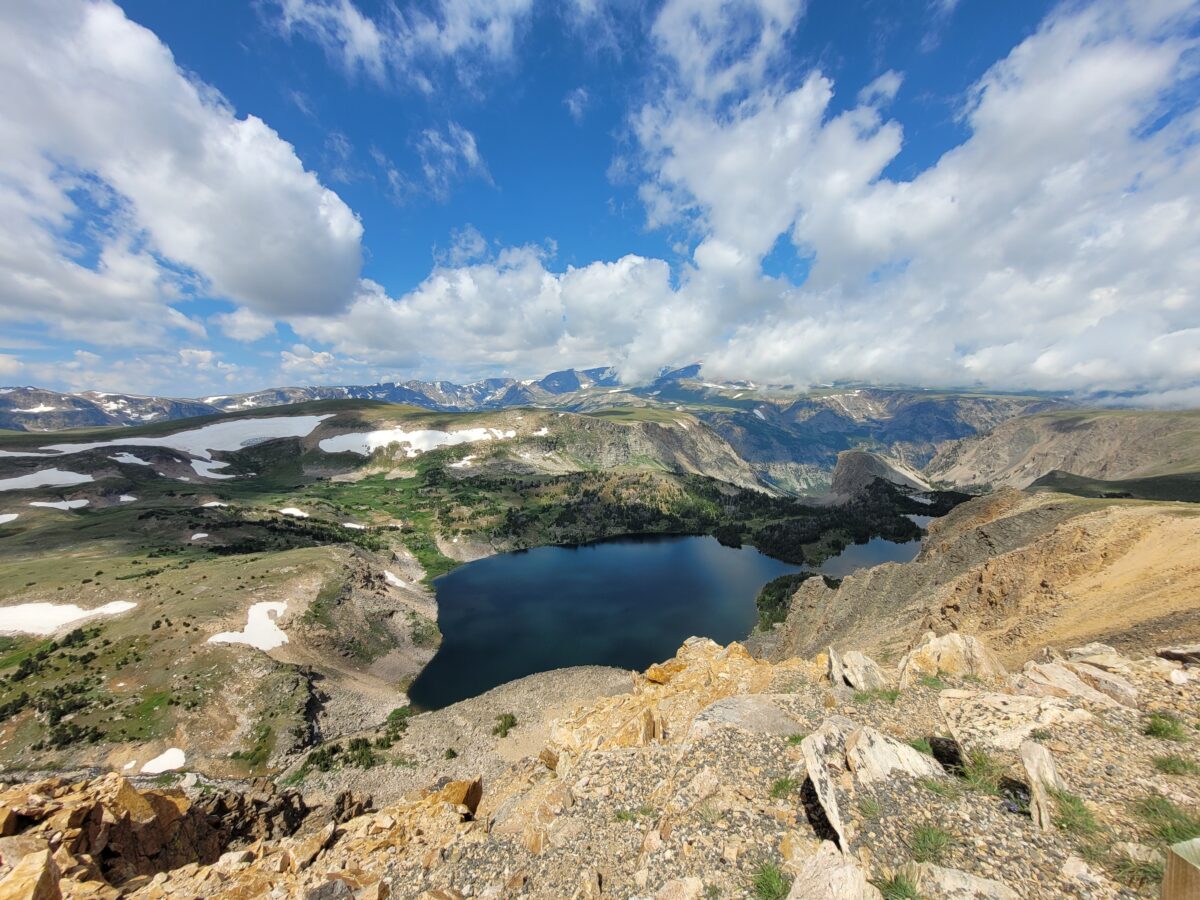 It was our long-held intention to drive the Beartooth Highway. For some reason during our summers in Wyoming, we never made it happen. But this year we weren’t leaving without the experience.

Heading for Cody, we found ourselves on the same road (yes, ice cream at Farson) as the one we recently traveled to Boysen State Park – Farson to Lander, Riverton, Thermopolis. But then on to Meeteetse (don’t blink) and Cody. This time we opted to camp in another state park, Buffalo Bill (of course) and we had a great campsite on the North Fork that came with a bonus – birdsong at breakfast! 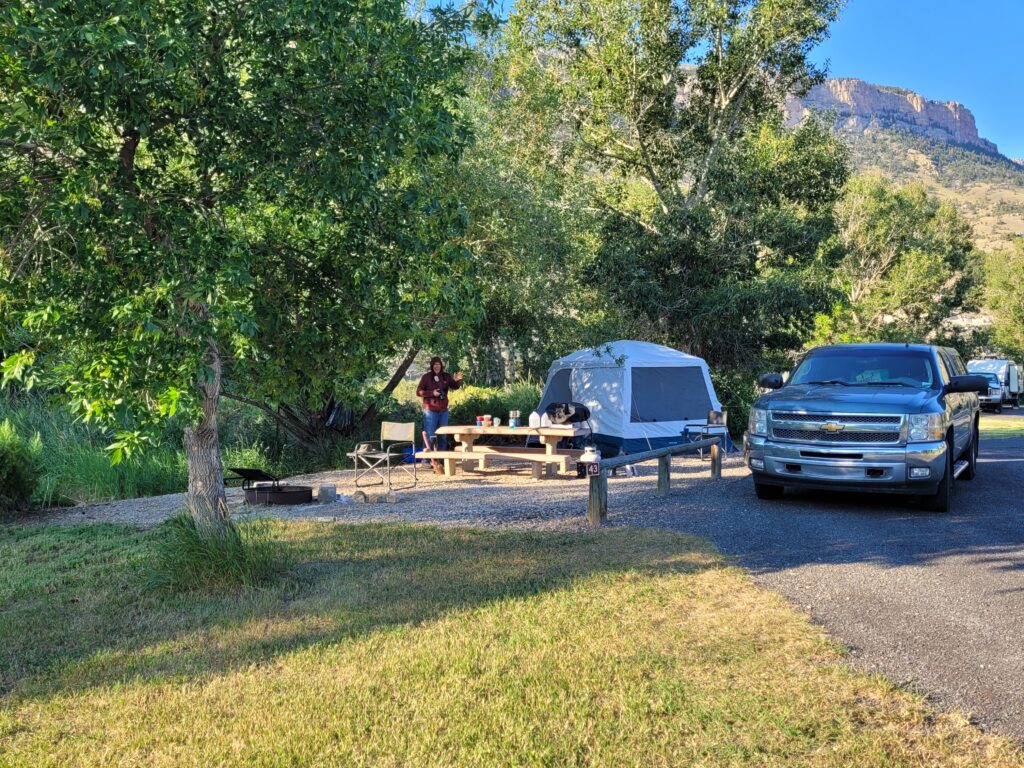 This park has an interesting history. It was completed in 1910 and was then the highest dam in the country at 325 feet. Buffalo Bill State Park was established in 1957 and provided recreational areas along the shoreline. But then it was determined that the crest of the dam needed to be raised by 25 feet for increased reservoir storage. The reservoir inundated the former recreation area, so the park had to be redeveloped in the 1990’s! 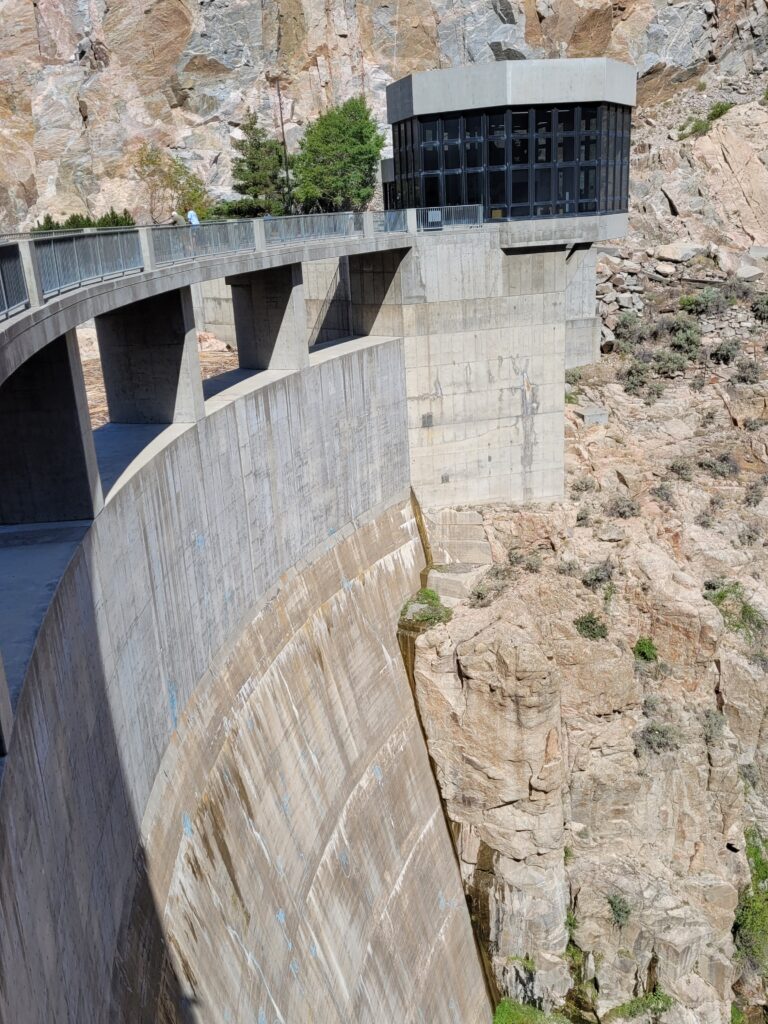 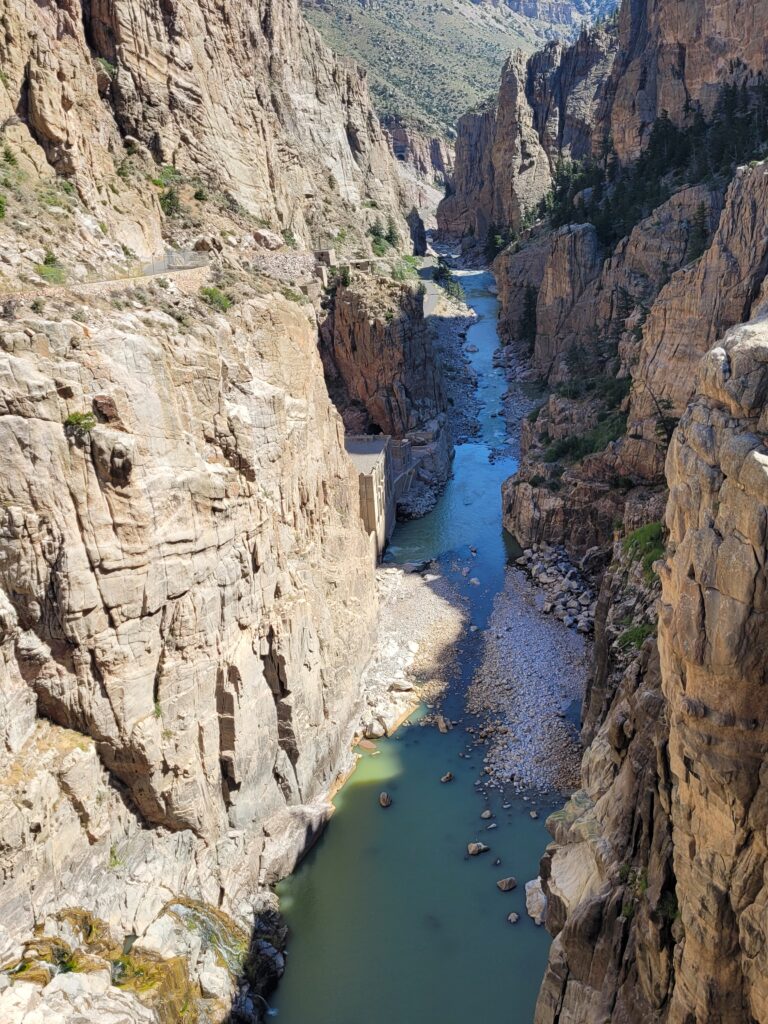 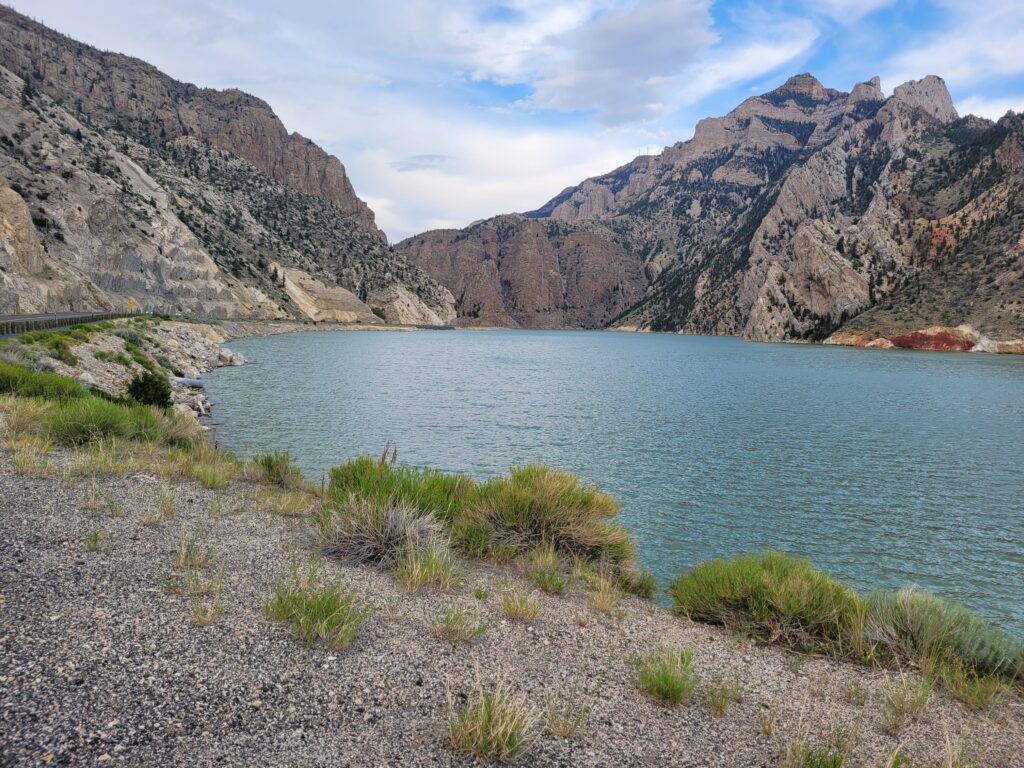 The Day of Endless Majesty

First thing the next morning, we headed for the Beartooth Highway via the Chief Joseph Scenic Byway. The 46-mile road follows the path taken by the Nez Perce as they fled the U.S. Calvary in 1977. Wyoming 296 links the town of Cody with the Beartooth Highway and the Northeast Gate of Yellowstone National Park. The route crosses the Shoshone National Forest through the Absaroka Mountains to the Clarks Fork Valley. 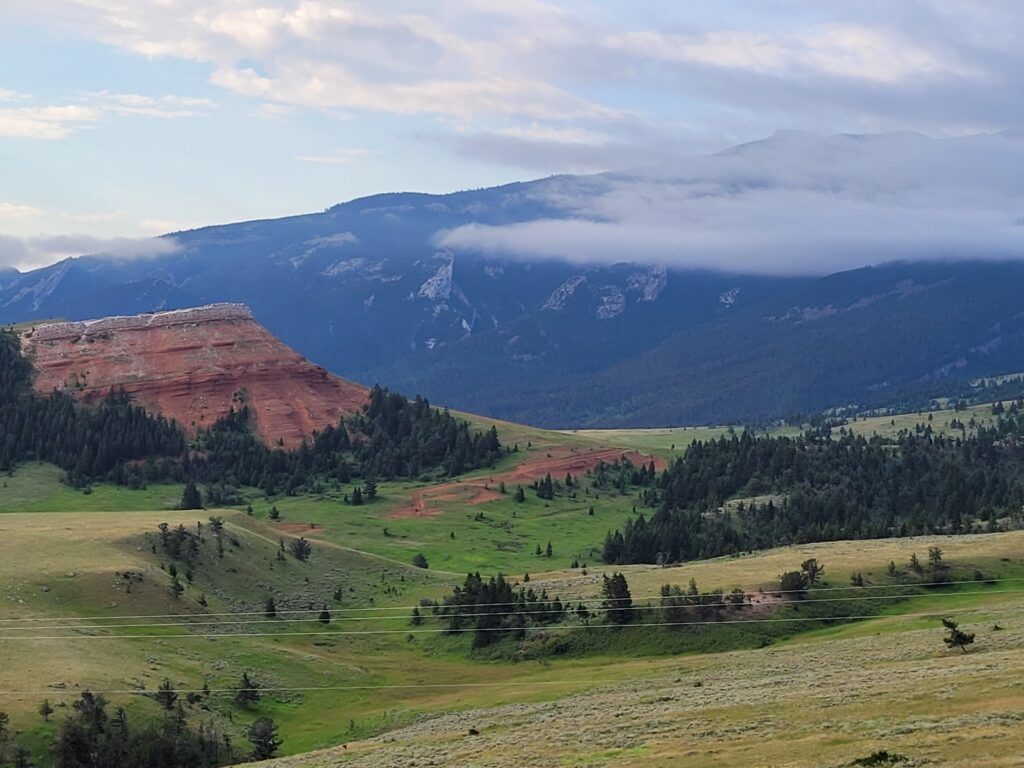 “The ridge you are standing on was the last significant barrier for more than 600 Nez Perce Indians and their 2,000 horses as they fled the pursuing U.S. Cavalry. After the battle of the Big Hole a month earlier, they knew the Army did not intend to leave any survivors. This became a flight for their lives.

Now on the run for more than 60 days, they had hoped that by crossing this pass and reaching the plains they could join their old allies, the Crows, or hasten on to join Sitting Bull in Canada. They began climbing to this point from the valley below. By this time, all were exhausted and heartbroken from the long journey and aiding their sick and wounded. But they also knew that winter was closing in. If they could make it over this mountain fast enough, they just might escape the Army and regain their freedom.

Accounts tell us that the Nez Perce left a wounded warrior on this mountain. He was discovered and killed by the Army scouts. Thus this site became known as ‘Dead Indian Pass.’” 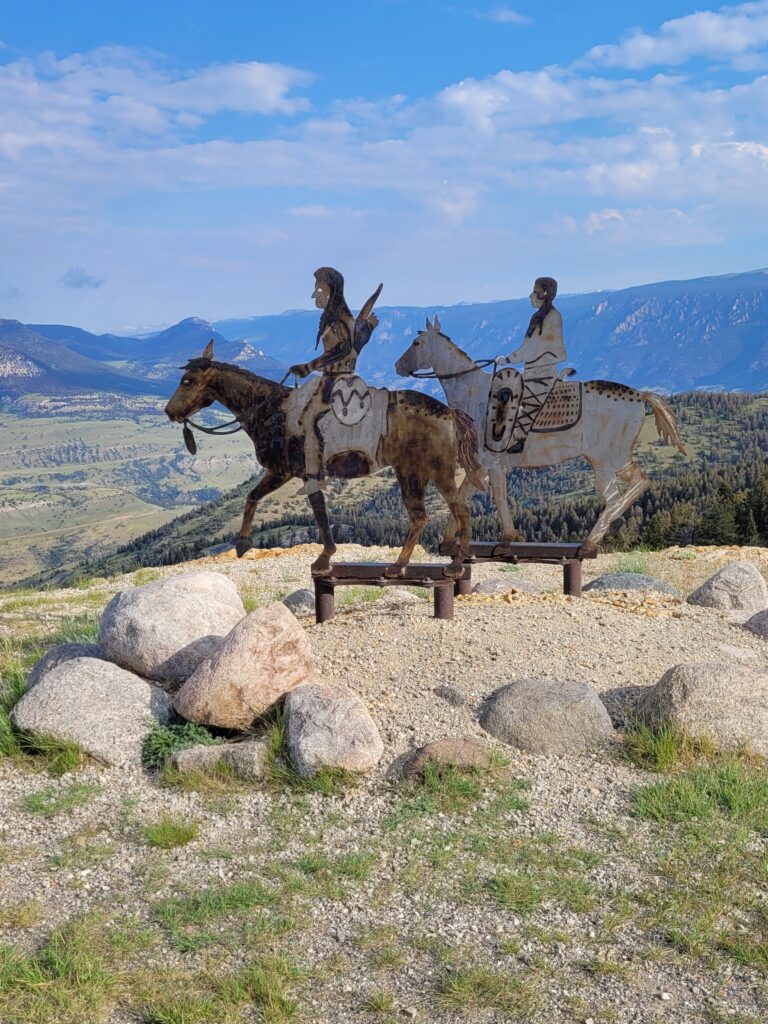 Impossible not to relate to the history, but my memories here will be 1) Aromatherapy. As I stepped from the truck, there was a waft of perfumed scents: wildflowers, sage and pine to greet me. And then, (2), when we stopped at the view of the Clark’s Fork from high above, we found a large area of wild clover with countless pollinators, bees and tiny butterflies.

Another “must see” stop along the 46-mile road is where the byway crosses the Clark Fork Yellowstone River. The bridge is far above the river since the river flows through a deep canyon. There’s a scenic pullout, restrooms and sidewalk that leads across the bridge. 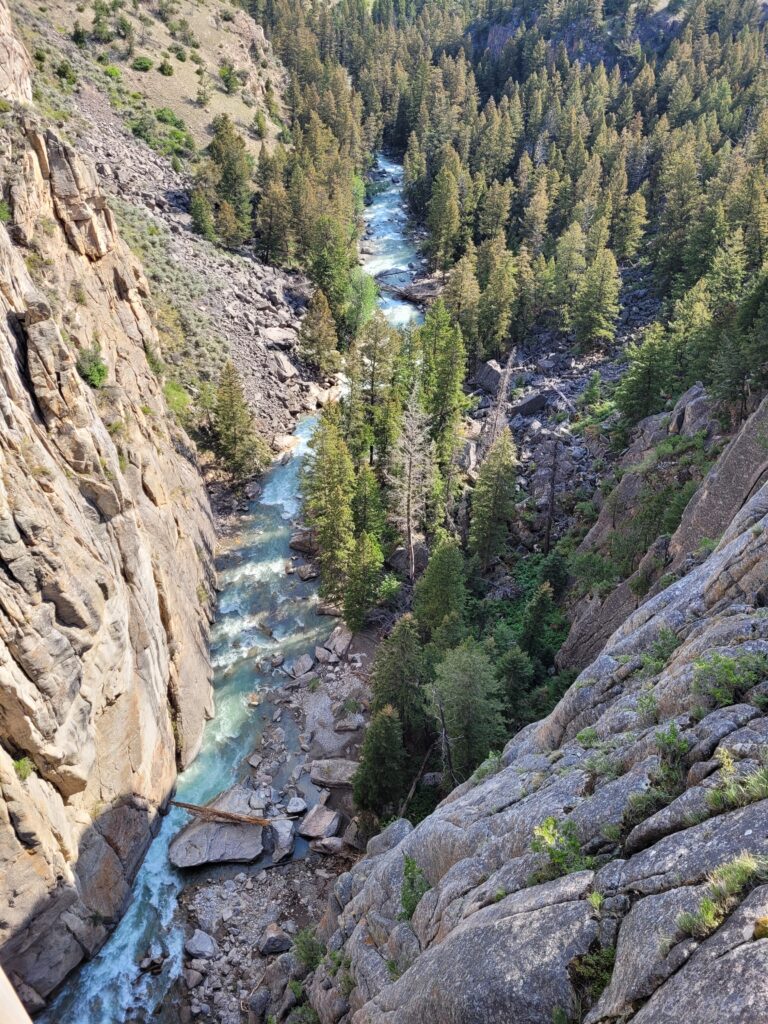 Then, and finally(!), onto the Beartooth “All-American Road” which is often referred to as “the most beautiful drive in the U.S.” It is a 68-mile route from that Yellowstone entrance mentioned above (7,500 ft.) to Red Lodge, Montana (6,400 ft). In between those elevations, the road rises to 10,947 at Beartooth Pass. There are many spectacular stops you can make along the way to enjoy lofty peaks, emerald valleys and 950 sparkling lakes. Even in August it was quite cool at high elevation, so don’t forget your windbreaker! 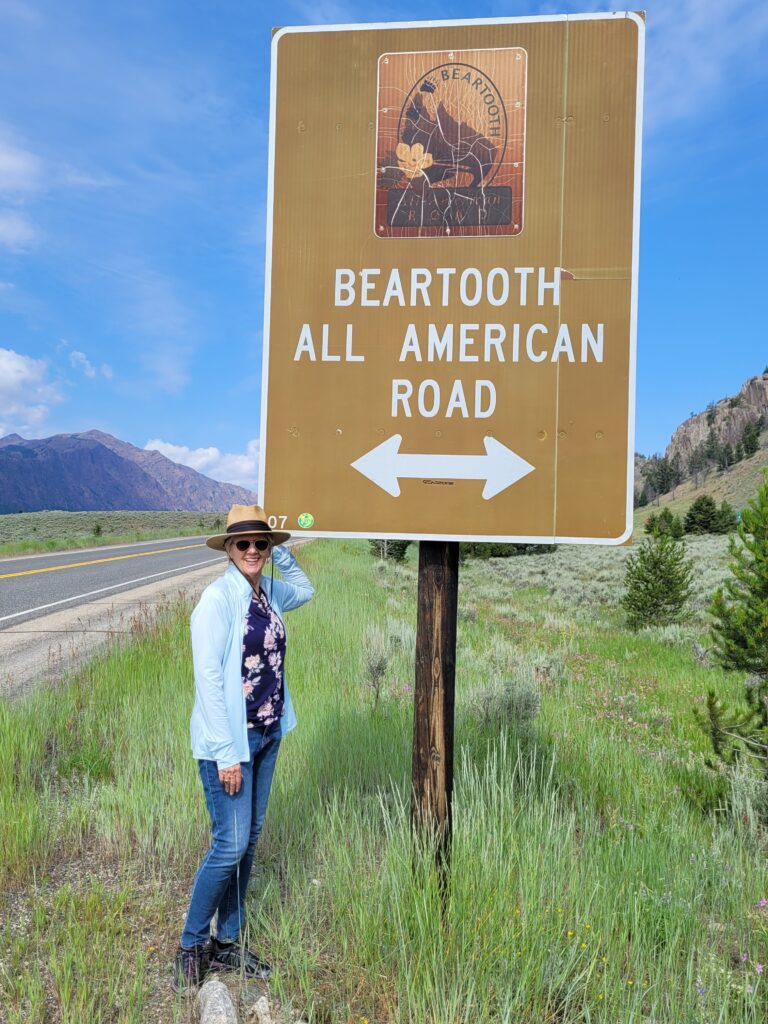 At the summit, I discovered a Marmot community. They were running everywhere in all directions with such purpose! 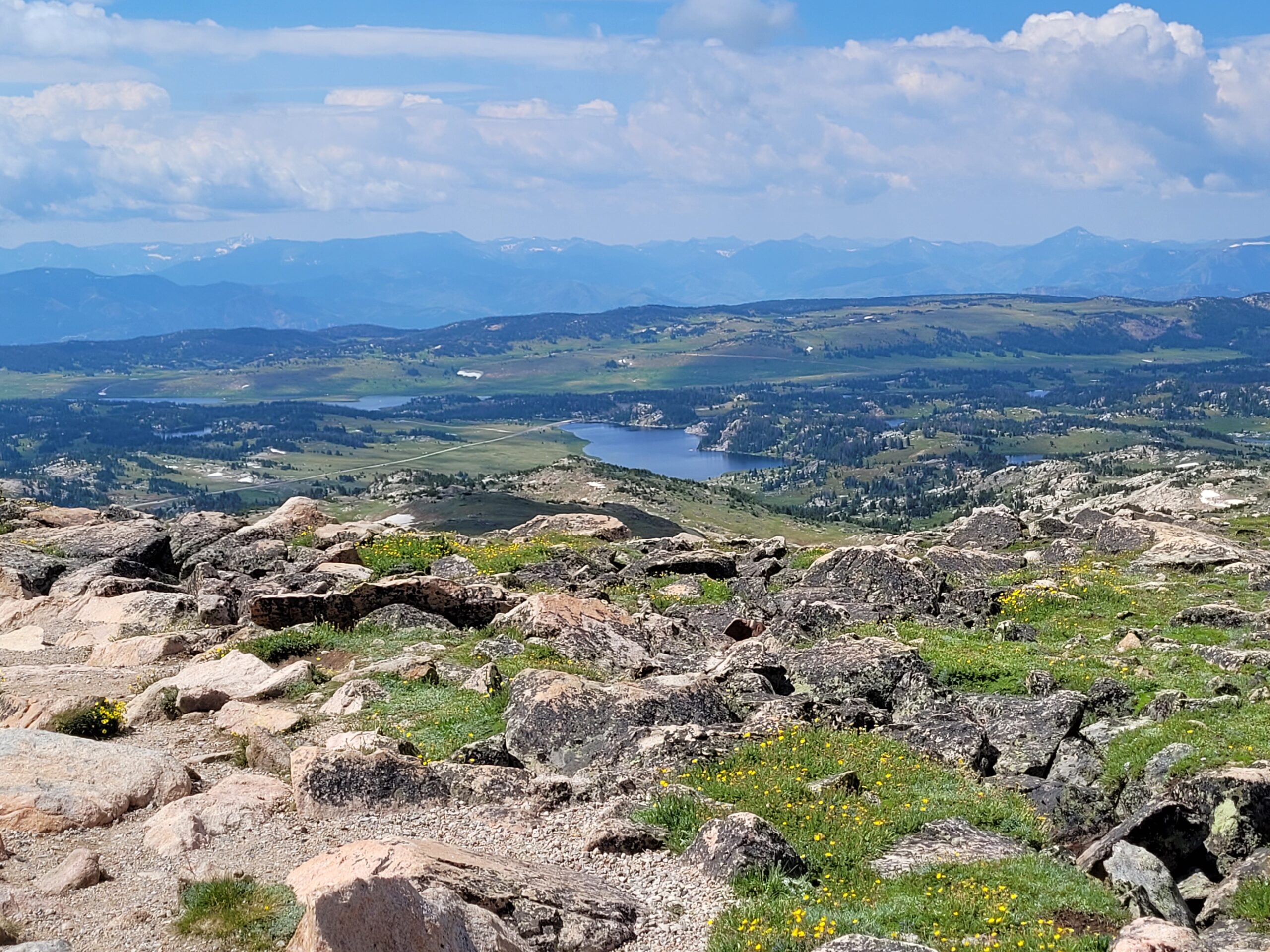 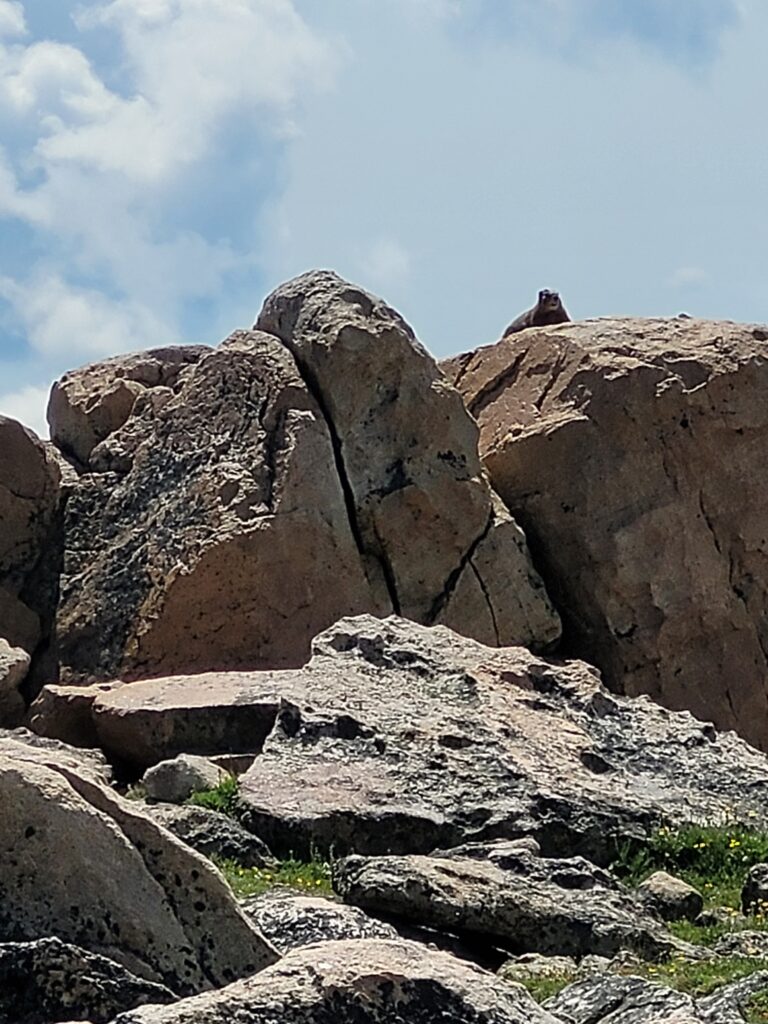 This will forever be “The Day of Endless Majesty.” If we were not completely in love with the natural world before that day, we would have been walking around Red Lodge with “Sold” stamped on our foreheads!

We had a fantastic lunch at Red Lodge Pizza Co. and visited with our server about the flood that occurred in mid-June. Rock Creek, which flows right through downtown Red Lodge, a town of 2,100 residents, swelled over its banks and flooded the downtown area – numerous homes and businesses were damaged or ruined.

The damage was very evident in the downtown area and our server told us the community banded together to help each other in such an admirable way at the time, and were only just then (60 days later) beginning to deal with the enormity of their own individual losses. They were already dealing with a housing crisis. Homes are expensive and hard to find.

Of course our desire to spend a day on the Beartooth could never have anticipated what we would see in Red Lodge. It makes us appreciate our lifestyle even more. It makes us want to get out there and see and fall in love even more. We could not be more grateful for the opportunities granted by this lifestyle!

The highlight of our return trip was our first visit to Sinks Canyon State Park, about six miles southwest of Lander and a popular climbing destination. It had started to rain, so instead of truck camping, we rented Yurt #1 in the Popo Agie Campground. Little did we know that was probably the noisiest yurt location because of its close proximity to the parking area, but it made for a great alternative. The rain cleared and we walked around the visitor center and on the gorgeous nature trail. 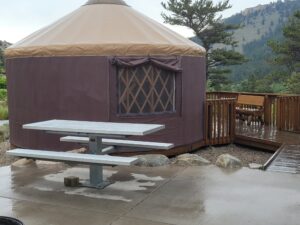 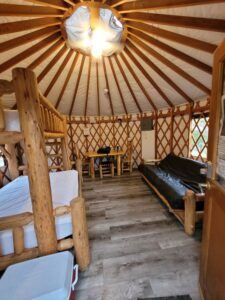 The “Sinks” got its name because of the Middle Fork of the Popo Agie, a rushing mountain river that flows out of the Wind River Mountains and through the canyon. Halfway down, the river abruptly turns into a large limestone cavern, and the crashing water “sinks” into fissures and cracks at the back of the cave. The river is underground for a quarter mile until it emerges down the canyon in a large calm pool called “The Rise,” which is filled with huge trout. 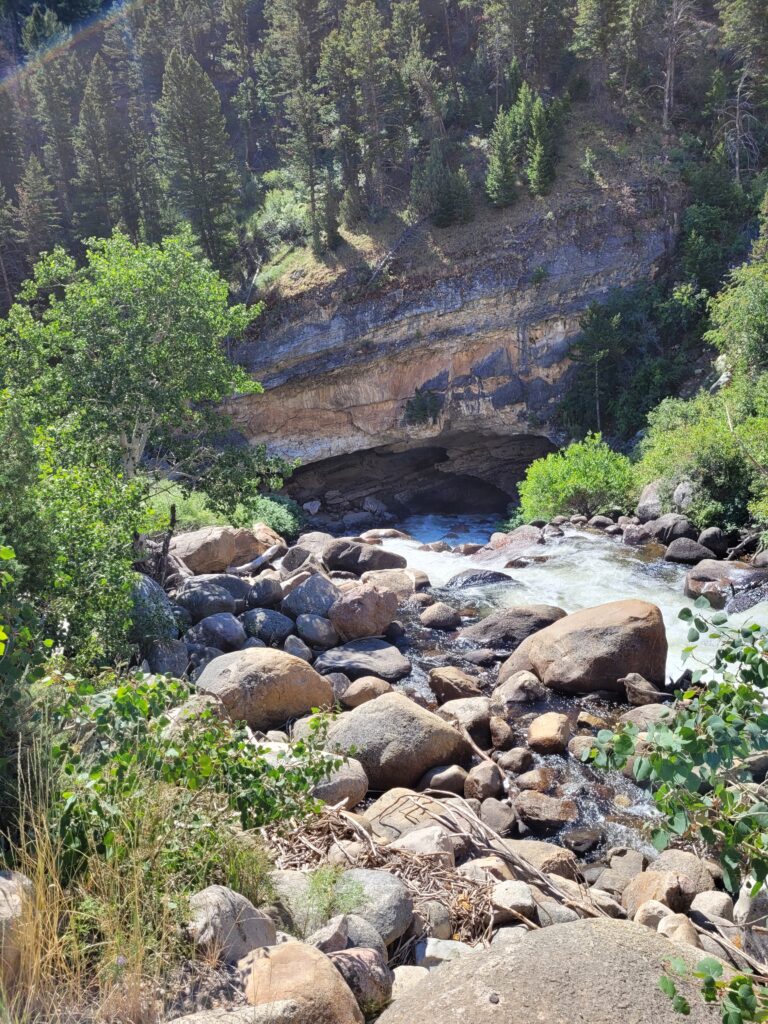 But there’s such an interesting mystery! A dye test proved the connection between the Sinks and the Rise, but it takes the water from the Sinks two hours to reappear at the Rise – only a quarter of a mile away. It should only take a few minutes flowing downhill… It was also determined that more water comes into the Rise than left the Sinks AND the water is warmer!! 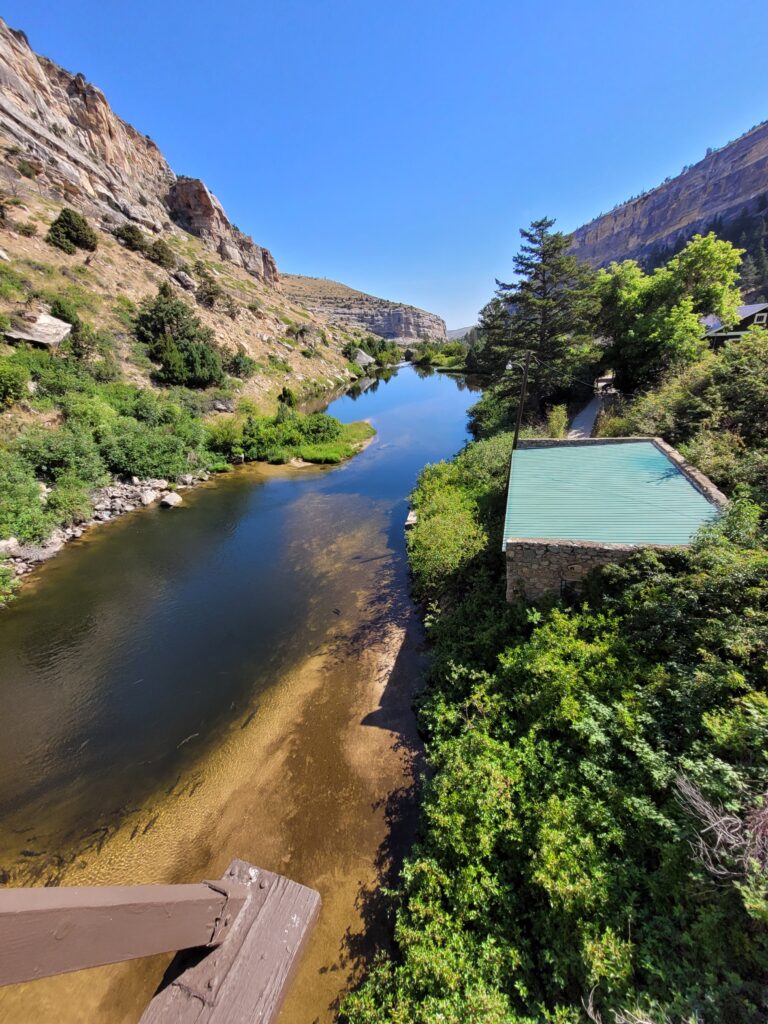 Next stop on our summer travel agenda? The Black Hills.