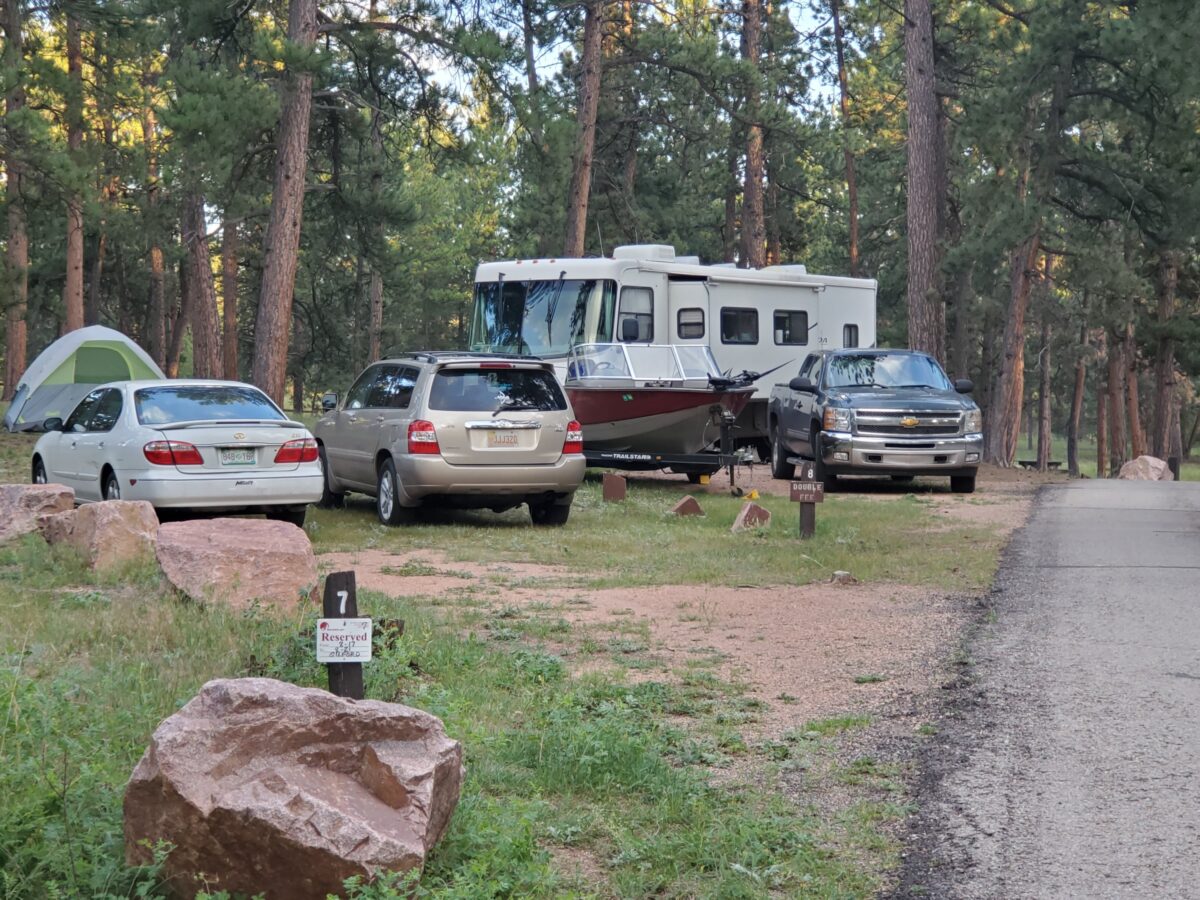 We visited Colorado (Colorado Springs, Denver and points east) six years ago – our first summer full-time RVing. But now we have a Granddaughter, Haley, going to grad school in Denver, so we planned a trip back to Colorado for a end-of-summer reunion with she and her Mom, Mandy, who lives in Albuquerque.

Mandy had a new tent to try out, so I searched Colorado Springs for a camping spot where we could have our RV and a tent site. Turns out the parks in Colorado Springs are mostly old with tiny spaces – and they didn’t allow tent camping! I expanded our search and we ended up at South Meadows (a Pike National Forest campground) about five miles from Woodland Park. The space we were assigned was HUGE, the camphosts awesome, and the proximity to area attractions couldn’t have been better. It was an excellent choice. 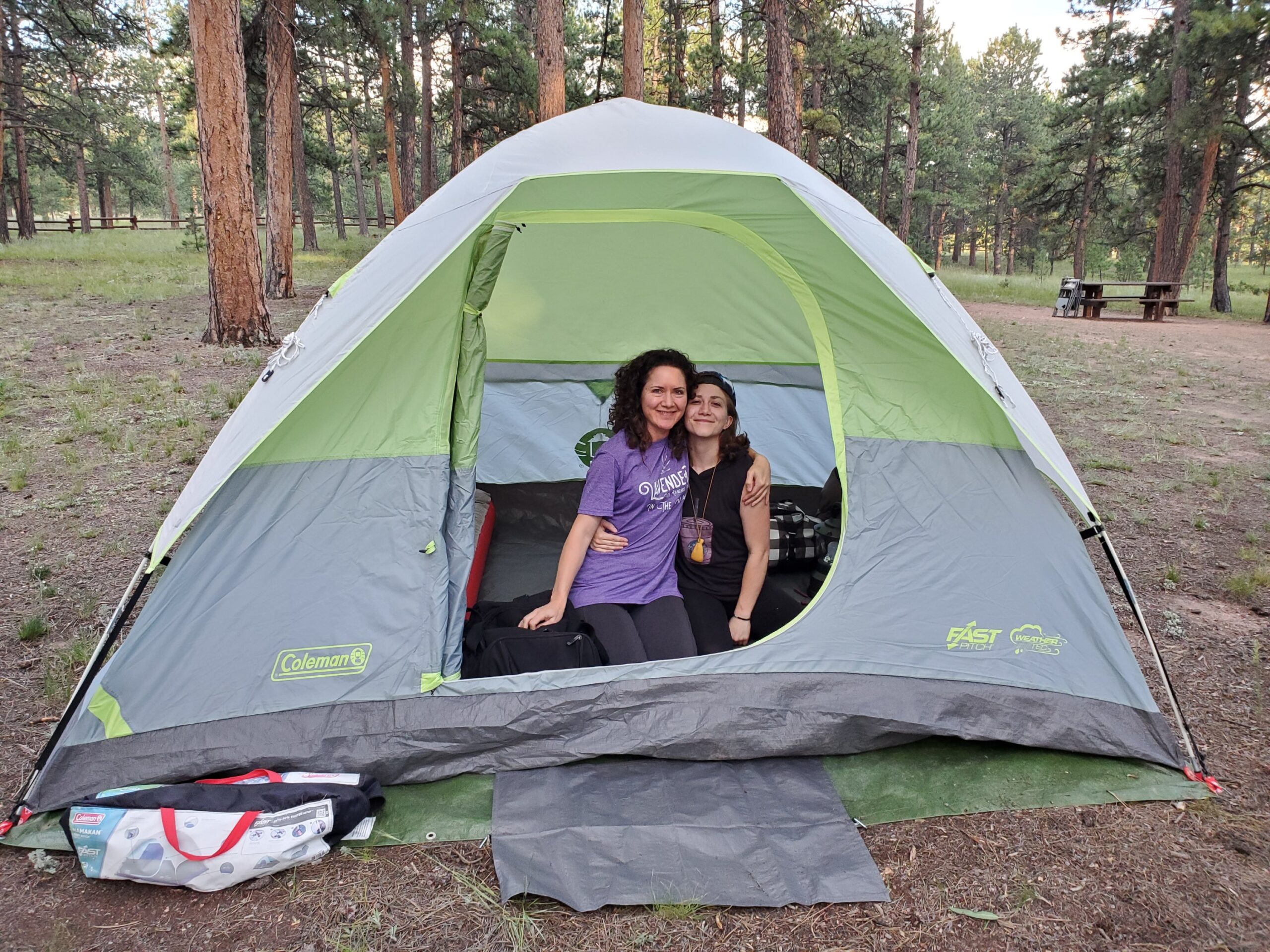 Garden of the Gods and Manitou Springs

Our first day, Garden of the Gods Visitor & Nature Center was a unanimous choice. This is the number one attraction in Colorado Springs  (30,000+ Google Reviews) and its free!

A little fascinating history from the website: “By the 1870’s, the railroads had forged their way west. In 1871, General William Jackson Palmer founded Colorado Springs while extending the lines of his Denver and Rio Grande Railroad. In 1879, General Palmer repeatedly urged his friend, Charles Elliott Perkins, the head of the Burlington Railroad, to establish a home in the Garden of the Gods and to build his railroad from Chicago to Colorado Springs. Although the Burlington never reached Colorado Springs directly, Perkins did purchase two-hundred and forty acres in the Garden of the Gods for a summer home in 1879. He later added to the property but never built on it, preferring to leave his wonderland in its natural state for the enjoyment of the public. Perkins died in 1907 before he made arrangements for the land to become a public park, although it had been open to the public for years. In 1909, Perkins’ children, knowing their father’s feeling for the Garden of the Gods, conveyed his four-hundred eighty acres to the City of Colorado Springs. It would be known forever as the Garden of the Gods ‘where it shall remain free to the public, where no intoxicating liquors shall be manufactured, sold, or dispensed, where no building or structure shall be erected except those necessary to properly care for, protect, and maintain the area as a public park.'”

It was very hot and quite humid on the day of our visit, so we hopped the 1909 Trolley for a narrated tour. Good choice! The trolley seats 14 guests and provides fantastic views around the entire park. 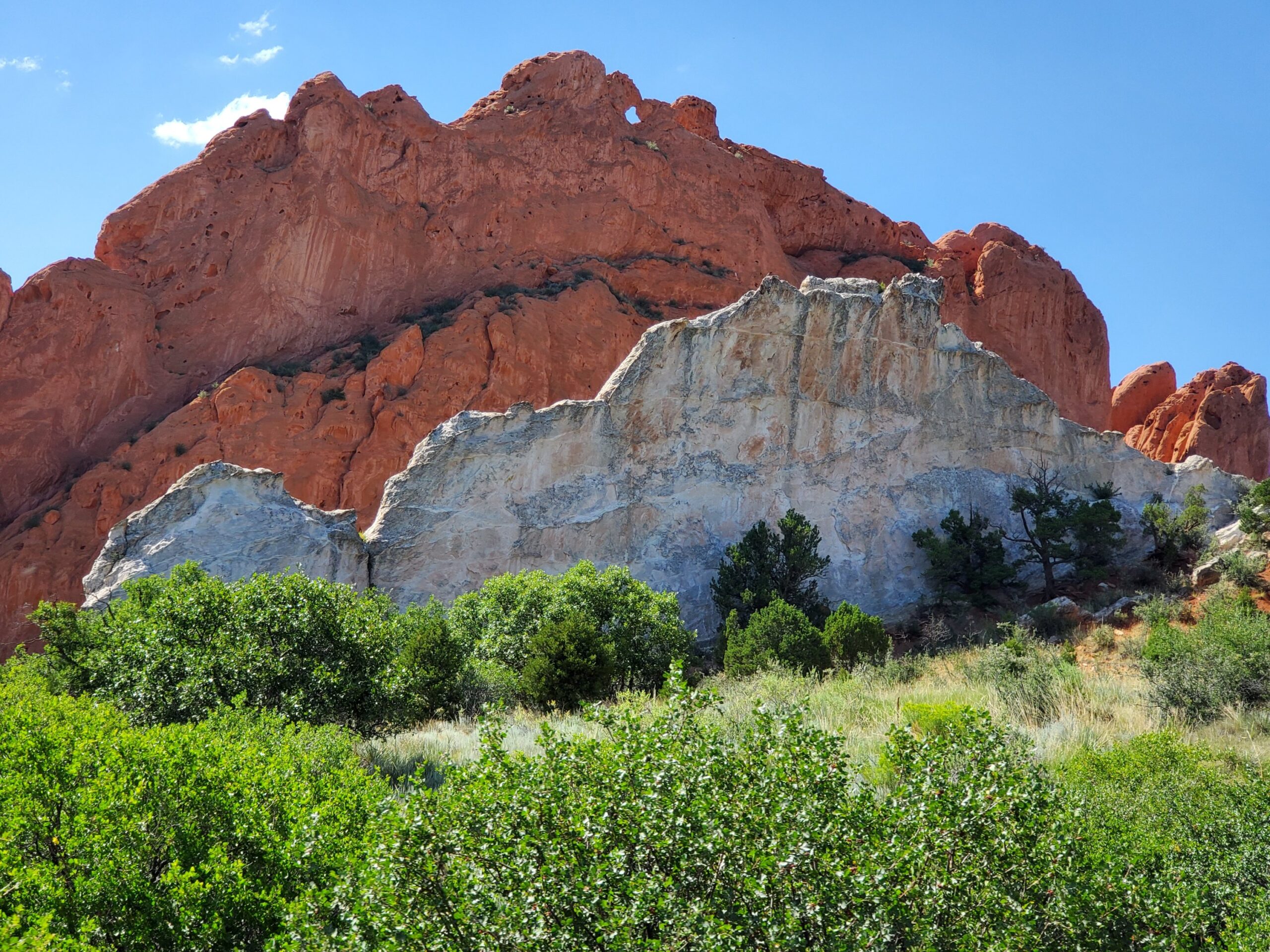 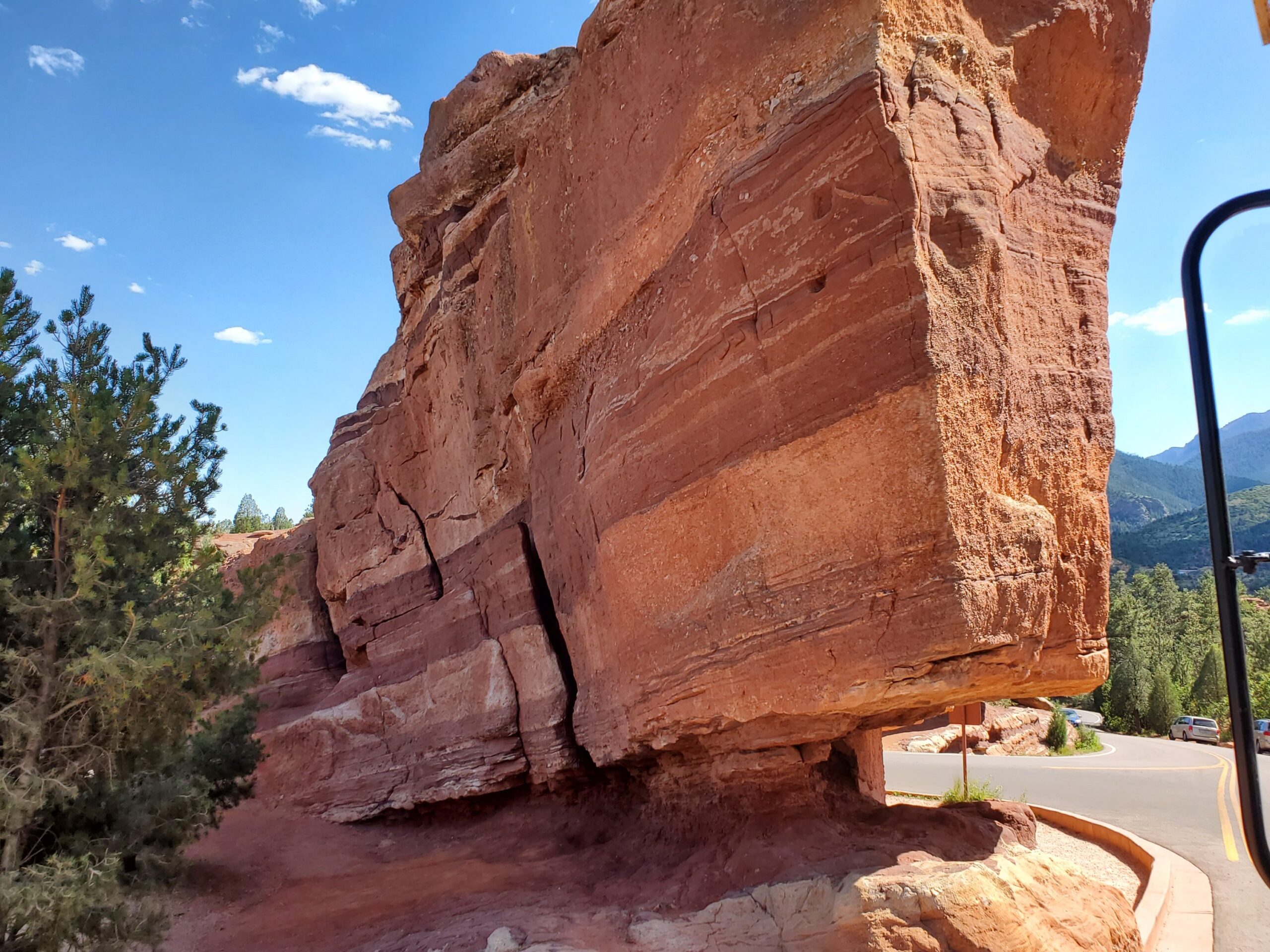 Another day we visited the town of Manitou Springs. Our first stop was the Manitou Cliff Dwellings, a group of relocated Ancestral Puebloan cliff dwellings and museums. The Anasazi Museum was established and the cliff dwellings were built starting in 1904, and were opened to the public in 1907.

Later we drove through the scenic town and learned about the healing mineral waters that have been attracting visitors for centuries. The water contains lithium, magnesium and potassium. American Natives considered the land around the water sacred and the natural carbonation in the water the “breath of the Great Spirit, Manitou.” It is said many tribes from different areas put down their weapons in hopes of gaining health and wellness.

We celebrated our 13th anniversary with lunch at the Cliff House known as the historic hotel nestled at the foot of Pike’s Peak that provides an atmosphere of Victorian romance and opulence dating back nearly 150 years. We sat on the veranda and enjoyed a great meal. 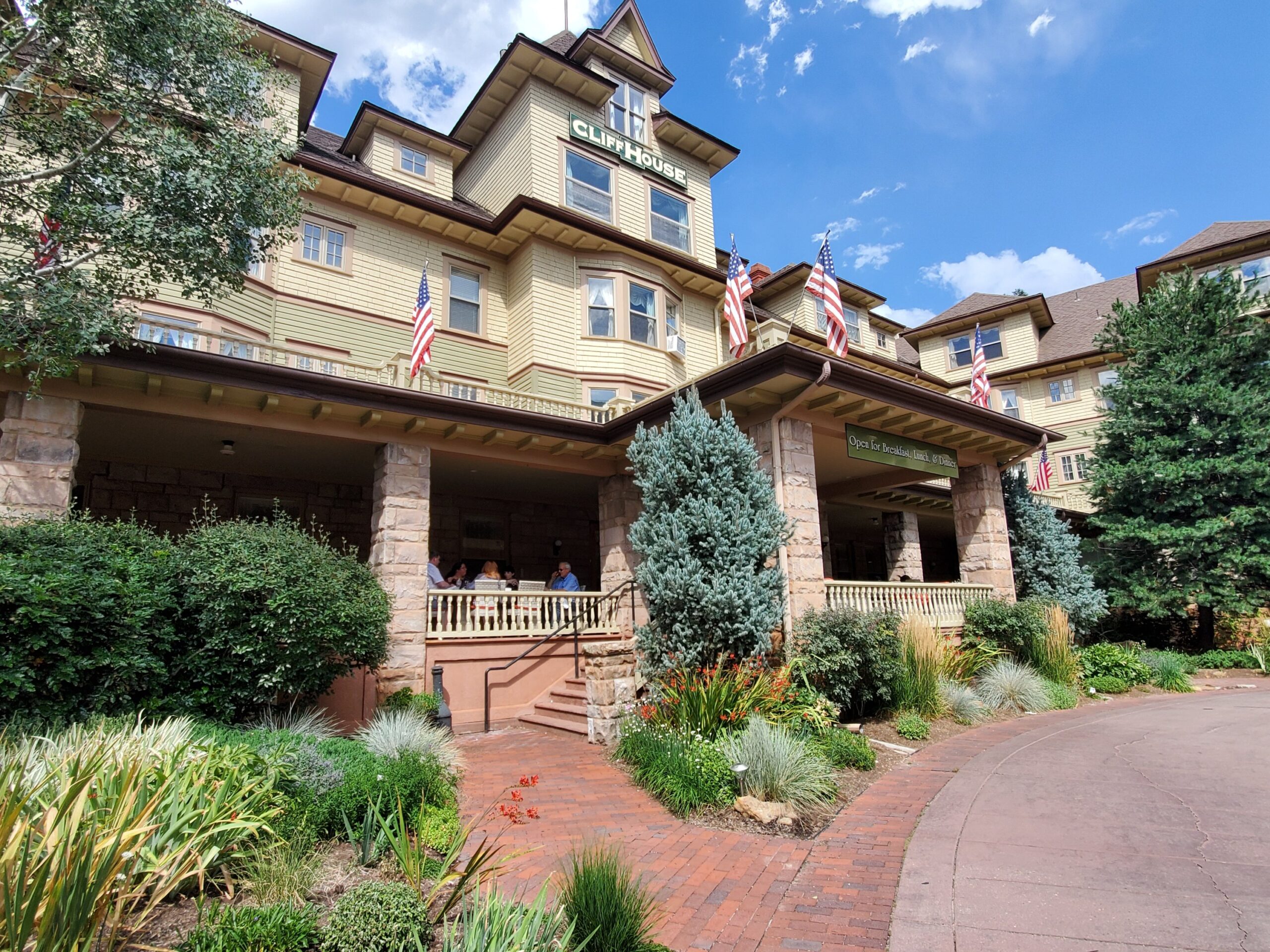 Later we walked around town and sampled the waters which are provided in public fountains. 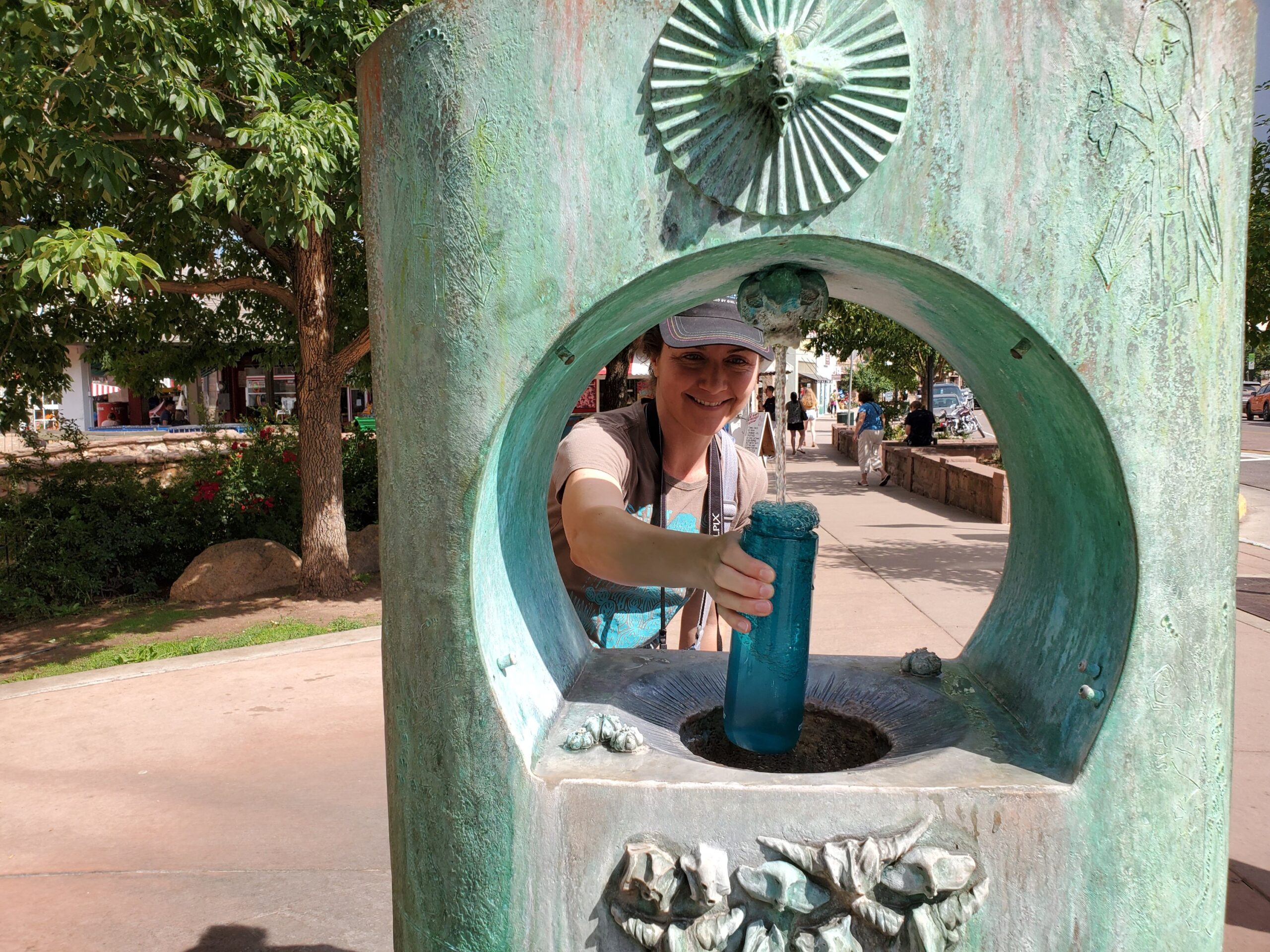 The drive from Colorado Springs to Gunnison (about 150 miles) through the center of the Rockies (on our favorite Highway 50) was fantastic! In doing some advance checking, I saw lots of concern if that stretch of road was suitable for large or towing vehicles. Let me assure you, the road is great. Monarch Pass (11,312 feet) was gorgeous, but so was every other mile.

The Curecanti National Recreation Area is a series of three reservoirs along the once wild Gunnison River. Blue Mesa Reservoir is the largest body of water in Colorado, boasting 96 miles of shoreline.  On our first visit to Colorado, I read about the area and the Blue Mesa Recreational Ranch and hoped someday to visit. Fortunately, someday arrived!

One day at the Curecanti Visitor Center, we learned about the Morrow Point Boat Tours, a 1-1/2 hour boat tour on the Morrow Point Reservoir. Traveling into the Black Canyon of the Gunnison, it provides an opportunity to learn about geology, wildlife, early inhabitants, the narrow-gauge railroad, dams and reservoirs. Sure – sign us up!

Tours begin at the Pine Creek boat dock, accessed from the Pine Creek Trail on U.S. Highway 50 (35 miles east of Montrose and 25 miles west of Gunnison). From the parking area, you walk down 232 stairs, then enjoy an easy 3/4 mile scenic walk along the old narrow-gauge rail bed before reaching the boat dock. The tours are led by Park Rangers.

The most striking feature of the lower reservoirs is the 700 foot granite spirelike  Curecanti Needle, which was used for many years as an advertising symbol for the Denver and Rio Grande Western Railway. The narrow-gauge railway famously ran along the northern bank of the river and passed near the Needle.

It was early afternoon when we returned to the truck after the tour, so we decided to venture on into the National Park. Having viewed it from the water, we were anxious to see the dramatic views from the top.

The size and scale of the imposing canyon is enormous – the walls on average are 2,000 feet deep. Rock walls are only 40 feet apart and plunge directly into the river at “The Narrows.” We checked out the movie at the Visitor Center and visited many overlooks. 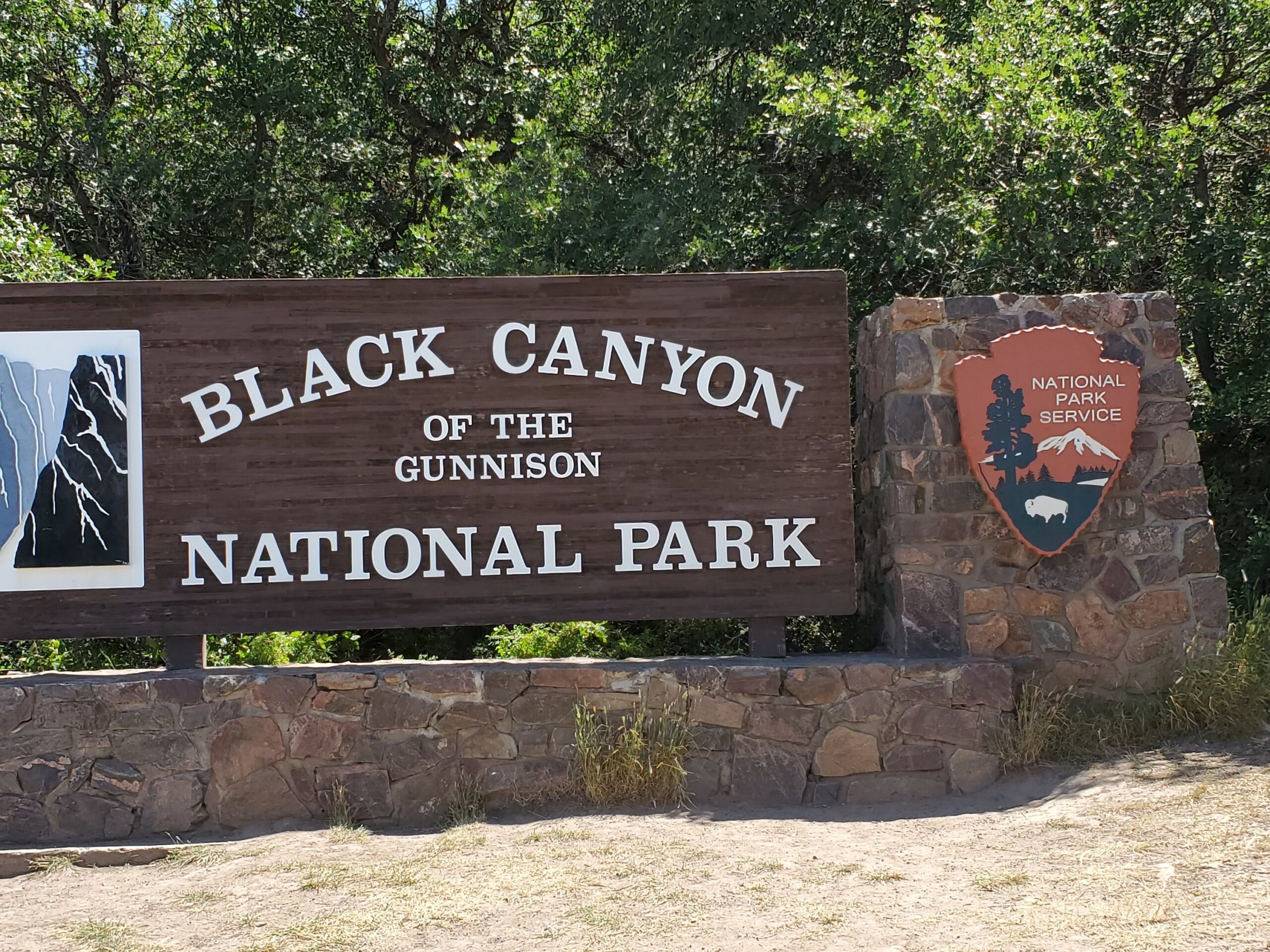 We chose The Views RV Park in Delores because of it’s proximity to McPhee Reservoir – another great fishing spot. The Views was probably our favorite camp of the season. We had a huge spot with a wonderful view. The owners were a darling young couple who kept the park immaculate.

McPhee Reservoir is the second largest lake in the state of Colorado and we caught Kokanee there on numerous fishing trips. 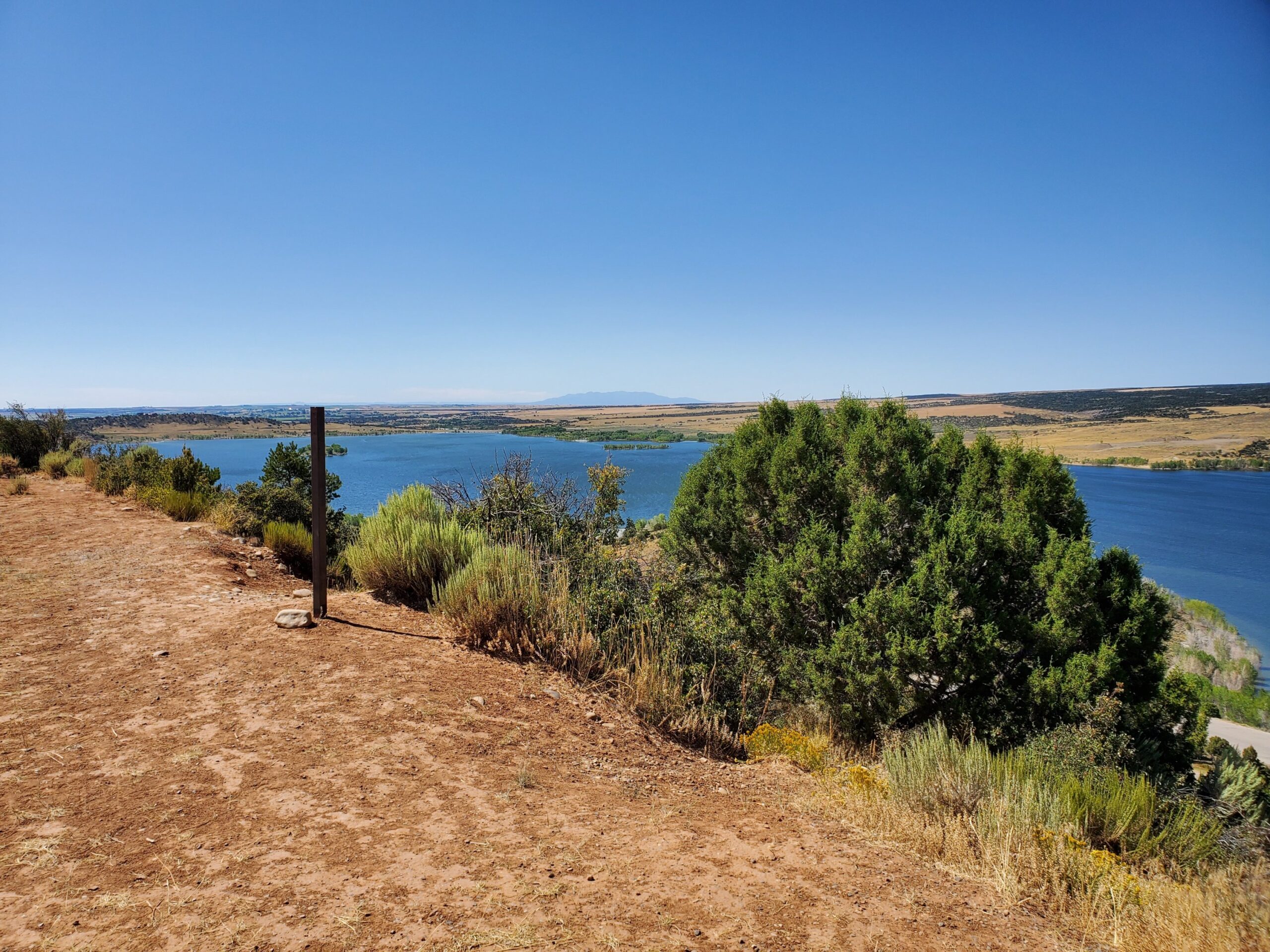 The Views was conveniently located to other awesome attractions. The drive to Mesa Verde National Park was only about 30 minutes. Mesa Verde is known for its well-preserved Ancestral Puebloan cliff dwellings, notably the huge Cliff Palace. The Chapin Mesa Archeological Museum has exhibits on the ancient Native American culture. Mesa Top Loop Road winds past archaeological sites and overlooks, including Sun Point Overlook with panoramic canyon views.

Canyon of the Ancients National Monument

One of the biggest surprises of our summer was this monument. It was less than a mile from our camp and we hadn’t heard of it before. The monument encompasses more than 170,000 acres of high desert in this part of Colorado, and is part of the BLM’s National Landscape Conservation System. We stumbled into a tour in the Visitor Center and it was helpful to have a little context in this huge monument.

Thousands of archaeological sites have been recorded in the monument, and thousands more await documentation and study.

Lowry Pueblo National Historic Landmark is the only developed recreation site with the Canyons of the Ancients National Monument. Lowry Pueblo has stabilized standing walls, 40 rooms, eight kivas and a Great Kiva. 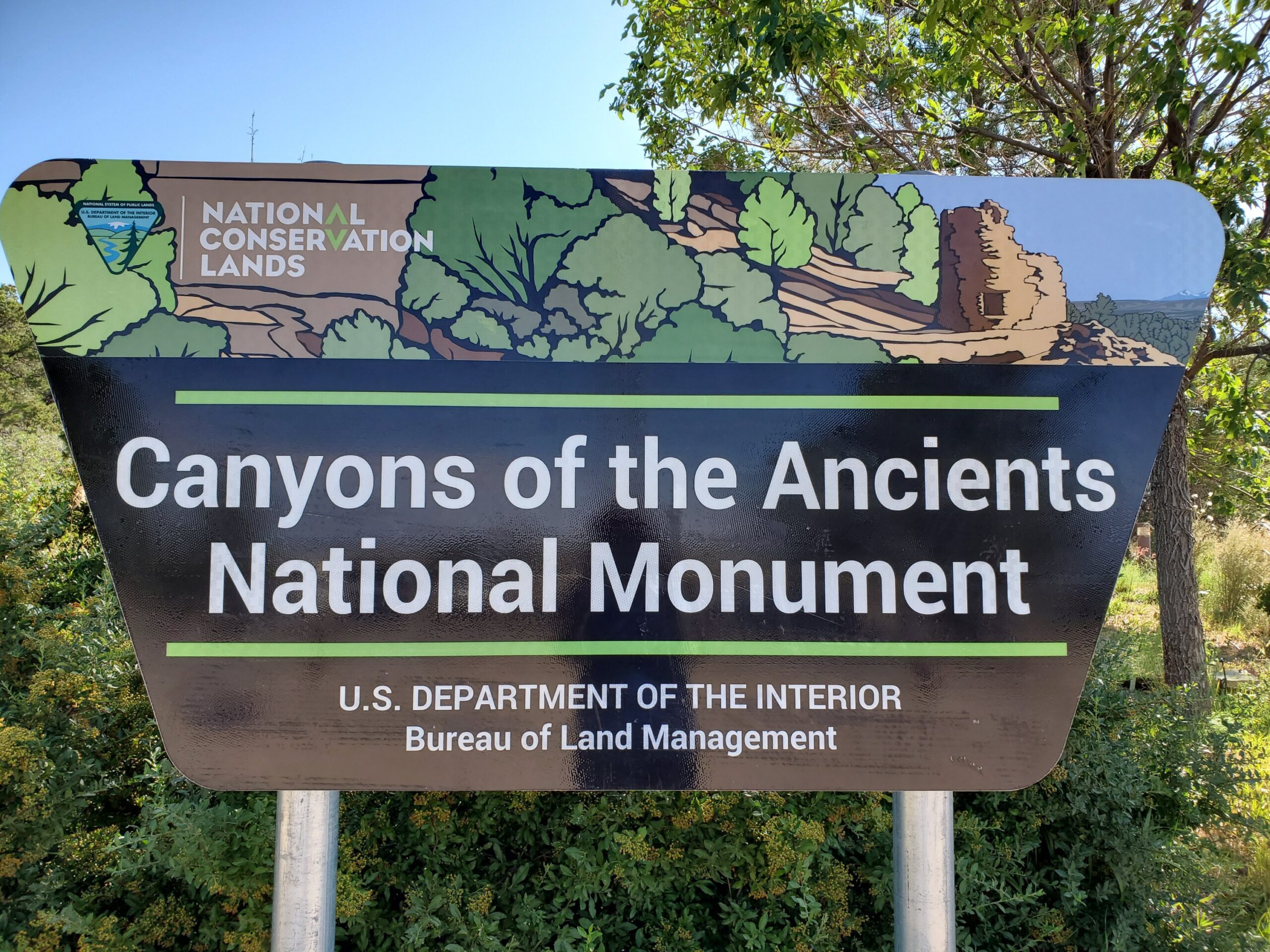 In the meantime, it’s early September. Temps are cooling… must be time to head for Arizona!